Body language: Why more than a half of job candidates fails at the interview

It is true that interview processes can be long and stressful for many candidates. This can lead us to make the most common mistakes during the job interview which is our shot to impress people that will decide on our future career.

This online survey was conducted in the United States by Harris Poll among 2,605 hiring and human resources managers between November 16 and December 6, 2016.

The percentages shown in the graph can give us an idea of what we could avoid at our job interviews and help us to give a good impression of ourselves when finding a job. 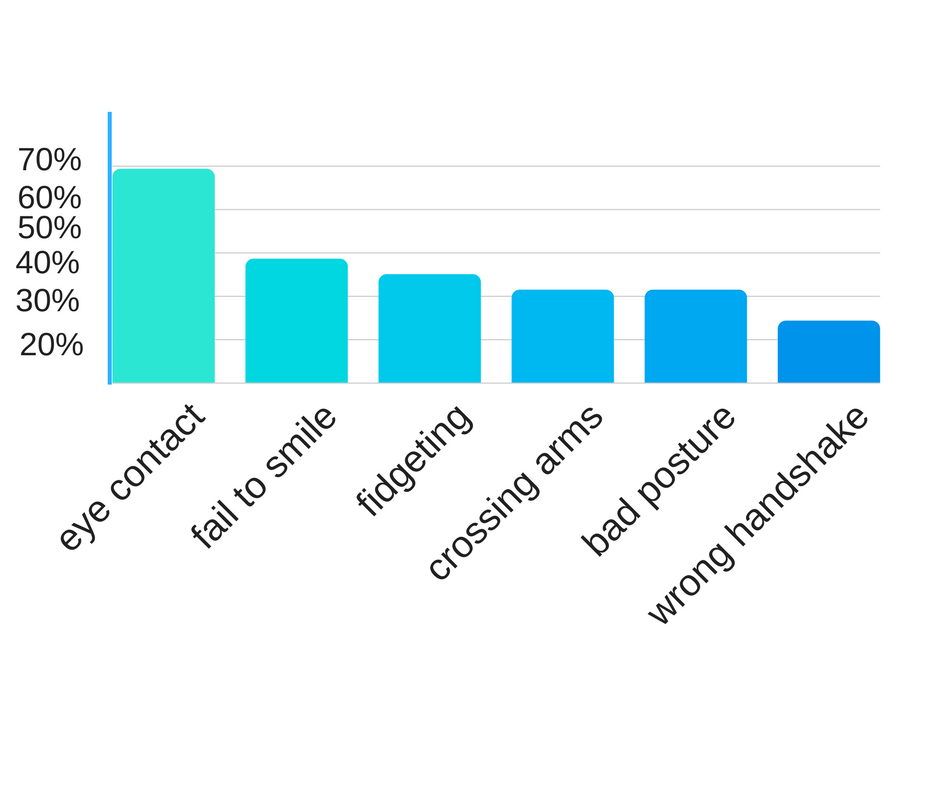 Data: Survey conducted online within the US by Harris Poll on behalf of CareerBuilder.

Making the right amount of eye contact at an interview can make the difference in whether you successfully land a job. According to University of California, Los Angeles (UCLA) professor and researcher Albert Mehrabian, “55 percent of messages processed by the brain are based on a person’s body language”.

Looking down at your shoes or focusing on the table are actions that can convey a lack of confidence and nervousness. Making eye contact, on the other hand, sends the message that you are prepared to answer questions regarding your skills, previous employment, and experiences.

According to body language expert, trainer and consultant Susan Constantine, “If your eyes in an interview are fidgety or continuously shifting back and forth, this can mean you are trying to conjure up an answer that you are not sure is the right one.”

Smiling is a natural part of any conversation, so going through an entire interview without curling up the edges of your mouth could make you seem cautious or create a negative mood in the room. Cracking a smile may go further than just relaxing the mood and could, in fact, play a key role in helping you get a job.

PLAYING WITH SOMETHING ON THE TABLE & FIDGETING IN THEIR SEATS (32%):

These two types of behavior can be a normal reaction of a person that has been through a stressful period and under tough circumstances. Most of the times it will distract the interviewer so even if you really want this job and “your whole life depends on these hours”, it will show a bad image of yourself. It might be seen as lack of respect and a person that is not reliable to focus on a project that is assigned to him.

If you cross your arms, you are blocking others out and sending a negative message. I’m sure you have also heard this. But is it accurate? The power of body language is probably best described by Amy Cuddy’s famous quote: “Our nonverbals govern how other people think and feel about us.”

When we’re scared or experiencing high anxiety, arms crossing helps us to deal with anxiousness or psychological distress. We can differentiate by noting that arm crossing is joined by frequent neck touching or covering of the neck dimple.

PLAYING WITH HAIR OR TOUCHING FACE (31%):

Most of the times, a person starts out with arms crossed then frees one hand to touch the neck, later returning it to the torso.

Touching face or hair is an indication of tension, anxiety, insecurity, or emotional distress and it does not reflect a confident candidate that is qualified.

Leaning back is lazy or arrogant, leaning forward is aggressive and slouching is just lazy. Instead, experts say to aim for a neutral position sitting tall as if a string were connecting your head to the ceiling.

“We found that the first impression begins with a handshake that sets the tone for the rest of the interview.”

Although your handshake and making eye contact may seem like small things, they actually have a huge impact on others. Hone your handshake as well as your other basic interview skills. A good handshake has the power to both diminish the impact of a negative impression and make a positive interaction even better, according to a Beckman Institute study.

Cynthia Burnham, a California-based charisma coach, says chopping or pointing motions can “cut up” the space between you and your interviewer in an aggressive way.

According to the Career Builder’s survey, 51% of the employers make their decision if a candidate is a right person for the position within the first five minutes of the job interview.

So take a deep breath and try not to make a part of these percentages at your next big job interview!

Source: Survey conducted online within the US by Harris Poll on behalf of CareerBuilder. More at Careerbuilder.com.