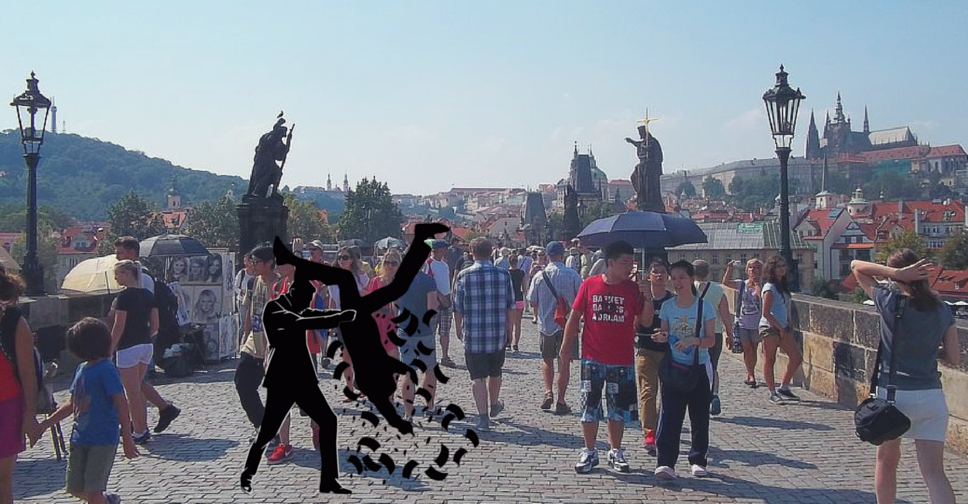 Getting Robbed In Prague: What To Do? (A Practical Guide For Expats)

Let’s go to the story first: I have been living in the Czech Republic for the past four years in my life, considering this to be the paradise on Earth regarding to safety, and my excess of trust while being out had a price: I was robbed two blocks away from my home, in the city center of Prague, while taking a walk with my one year and four months son – who was in his stroller. I cannot describe what I felt when I found out what had happened.

Let me explain it better: I was believing so much IT HAD NOT HAPPENED that I played on my mind all the possible scenarios considering the theft not having happened. To make it short, I was returning from a Mexican restaurant with two American friends who were visiting town when, on Ostrovni street, I saw a very loud and messy group of guys coming our way. As people in Prague, even when drunk, tend to be very polite with women around prams, I thought they would just move to the other sidewalk, and that surely did not happen: one of the guys came first, gave a huge push on the top of the pram, to the point of waking up and scaring my son who was sleeping then. As I rushed to his aid, his companions, who were left behind, surround me, what pushed my two friends aside, and I felt another push on the pram, but thought nothing of it – maybe it could be cobblestones, or just the bunch of guys coming at the same time around us and trying to make their way through the sidewalk. I was surely scared, but just thought we just had the bad luck of being on the way of loud drinkers.

The next morning, when I checked under the pram for my son’s bag, where my phone and wallet were the night before, they were nowhere to be found. I checked the full home, with my friends, with my husband – nothing. Then, being a Brazilian, my old blood hit me – if you have read a little about safety in Brazil, you know we have a “few” issues with it there, considering what we have on, purses, jewelry, good shoes and so on when we go out, getting out of home as simple as people not to become “targets” – the push on the pram I felt the day before was actually someone taking the bag from us. The push on my poor little son was actually a way of distracting me from the rest of the pram so that it could be assessed for values and having them taken. A sad reality I learned while at the police station: mothers with children and pregnant women are easy targets due to restricted mobility and for being easily distracted once their main value, their children, are somehow put in danger.

Reality sunk, the five stages of grief went through (have a laugh for me on all the situation here: https://youtu.be/G_Z3lmidmrY). I cried, I screamed, I pulled my hair… nothing helped. It is what it is. Once you finally realize you got robbed (or face any situation worth reporting), after all the drama sinks in – here is what you are supposed to do on a practical side:

1. Reporting it to the police:

Much to my surprise, I was very well treated at the police station, and could report all in English language – using an English speaking interpreter available at the police station where I reported the occurrence. For that, if your Czech escapes you as it escaped me from the stress and being so nervous over the situation, just go to the Police Station located on Jungmannovo Namesti 1, between Wenceslas Square and a small passage under the B’ata Store). They have an English interpreter there at all times – by the way, a very kind and polite lady, who helps you with everything needed in the communication with the police officers. She showed me all the documents being done in both English and Czech, but do not expect miracles – the ones you will sign yourself will be in Czech, as it is the local language and for legal purposes, the one that prevails.

The whole reporting took about ninety minutes. If possible, take a native Czech speaker with you – as in many situations here in the Czech Republic, I feel the treatment of authorities towards me changed a little when a Czech citizen was around. The police report with the final words on the police regarding the investigation arrived to my home by mail six weeks after the theft (and they checked cameras on the street I got the phone stolen – of course the thieves were not found, and I was able to track my phone through Google Device Manager online – it was already enjoying a nice vacation in San Tome and Principe, Africa). The final police report comes to your home a month after your visit to the station (mine arrived five weeks after my own visit).

2. Reaching out to the Lost and Found of the city of Prague:

As in my case there were also documents involved, I made a quick stop at the Ztráty a nálezy on Karoliny Svetle 5, Prague 1. Make sure you, again, take a Czech friend with you, as their English language skills are very limited. When trying to reach the address, though, you will see that the Lost and Found building is not necessarily on number 5 – you need to follow a sign with arrows, turn around the corner to your left and reach a yellow sign (both signs made with regular paper). Even better, follow my pictures. :)

I spoke with the lady there, she looked over the lost things in the back room, and to my sadness, nothing was found. I really hoped that the bag itself (easily spotted bright blue chicken bag from the Brazilian cartoon “Galinha Pintadinha” that we received as a gift during our visit to Brazil last December) would be turned in… but that didn’t happen. My Brazilian driver’s license (that I paid a fortune to renew also during our trip to Brazil) was inside the wallet in the bag, along with my Brazilian ID card (also just renewed) and my credit card. I was able to cancel it on the bank – but I am still managing to translate the police report into Brazilian Portuguese so that Brazilian authorities can give me the two documents lost back for free. Overall I would say that, in our despair, this Lost and Found office is a nice resource from the city of Prague, and I heard many stories with happy endings when it comes to having belongings returned to their owners. I still have hope – at least for the bag and my old wallet. Fingers crossed for me, please! :)

3. Posting in Facebook groups and social media profiles in general regarding the theft:

4. Make sure you insure phones and other expensive goods:

To my luck, my phone, a Lenovo Vibe Shot, bought last October at Alza.cz (https://www.alza.cz/), was insured. I just needed to wait for the final police report. Having it in my hands, I called their Claim Line (once again, a native Czech speaker is needed), went to Alza.cz in Holesovice to take the first and the final police report with the Claim number given by the agent with who I spoke on the phone. Two days later, the insurance contacted me by e-mail, saying their report was positive and that they would contact Alza to replace my phone. Five days later, I went to the same Alza store to pick up my new phone (and I am definitely not saying that this a good experience and that having a new phone is wonderful – my work, pictures and all else lost on the other phone would make me want it back on a heartbeat, with all the scratches of my one year old son dropping it so many times on the floor… but still – I will have my investment in some extent back). So the final word is: INSURE ALL YOU CAN! (I cannot stress that enough!)

“The result of the whole experience? Forty eight long, long days without my beloved phone. The lesson learned? Excess of trust can lead to losses – and quite annoying ones!”

My general advice, through my own experience is: while you are out and about in Prague, specially in the touristic areas, watch your belongings! You never know who is around you, and their intentions.

Better to be safe than sorry!

Now tell us your story: have you ever been robbed in Prague or anywhere else? How was the whole experience? Were you able to get back your belongings?