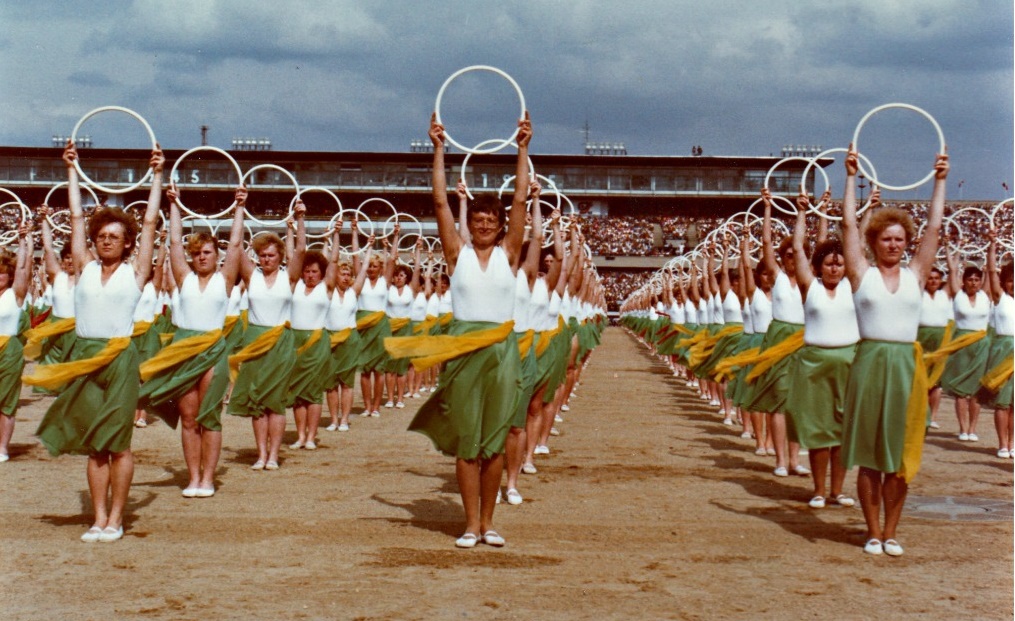 When you visit a country for the first time do you ever think of what it looked like a few decades ago?

Prague airport is slightly smaller than the sign which says ‘Prague Airport’, at the front of the terminal building. The thumping Stalinist scale of it made me wonder whether the sign had been built before radio navigation, so that pilots could read it while still only half-way across the Atlantic.

[…] the immigration officials, who sat in their glass boxes and re-fought the Cold War with every disgusted flick of their eyes from passport photograph to decadent imperialist standing before them. I was that imperialist, and I’d made the mistake of wearing a Hawaiian shirt, which, I suppose, emphasised my decadence. […]

I changed some money and went outside to hail a taxi. […] I found a cab eventually, and told the driver in fluent English that I wanted Wenceslas Square. This request, I now know, is phonically identical to the Czech phrase for ‘I am an airbrained tourist, please take everything I have’. The car was a Tatra, and the driver was a bastard; he drove fast and well, humming happily to himself, like a man who’s just won the pools.

That is how Prague in 80’s looked through the eyes of Hugh Laurie’s character in his book The Gun Seller (p. 97, 1996). And how does it measure up now?

Since there is nothing eternal out there change is bound to happen. When it comes to cities it is always provoked by the need to adapt to the new political, economic and even societal conditions. The illusions of a cheap communist “convenience store” are just a nostalgic memory but the Czech Statistical Office is bringing those back to light. In order to compare “socialist” and “capitalist” consumption levels the character “Mr. Average” was created. Now everyone can calculate how much food they could buy for the average salary in 1989 and compare it to today’s amount. The results might be quite surprising for some of you.

The current average gross wage (January 2016) amounts to 28 152 crowns, while in 1989 it was 3 170 crowns. So, in 1989 “Mr. Average” could buy one liter of milk for 3 CZK and nowadays the price is 17.7 CZK. One kilogram of Edam cheese used to cost  23 CZK while in 2016 the price amounts to 107 CZK. Back in 1989, in order to buy a traditional Czech beverage /also known as beer ;)/ you had to pay mere 2.5 CZK while now the price has risen to 11 CZK for a bottle. But how much of the elementary products could you actually buy with your salary? The graphic presentation below compares our purchasing power in 1989 and today.

The gross wage of 28 152 crowns today is not paid to everyone in the Czech Republic, of course. However, it was equally exceptional to get paid 3170 crowns in 1989. Perhaps the cashier in the supermarket still brings home barely twelve thousand net per month, while the IT specialist is much better paid. But as we all know, the type of job and qualifications as well as a lot of other factors are taken into account when determining the salary for each person. To get more realistic view on salaries, we could say that nowadays a clerk at convenience store reaches about 12,000 in crowns, while in 1989 was bringing home each month around 1,500 crowns. Statistically, modern shop assistant (and not only) is doing much better than its predecessor in a communist store.

Does this comparison mean that every resident of the Czech Republic has automatically better up their overall standard of living? Not necessarily. The food becoming cheaper does not mean that the expenses for utilities (such as electricity, gas, Internet) have decreased. However, it should be noted that many goods available now couldn’t be had or simply did not even exist back in 1989.

One thing is certain, though. Despite the post-communist nostalgia for the socialist cheap “convenience store” statisticians demonstrated with sufficient evidence that the food is significantly cheaper now than it was twenty something years ago.

Searching a job in the Czech or Slovak Republic? Go to>> FIND A JOB