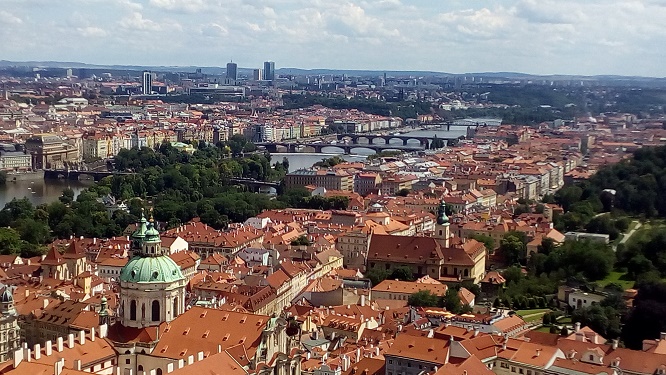 Working in the Czech Republic presents plenty of opportunities for expats. It’s a stable and prosperous market economy and beneficial location in the center of Europe with favorable working conditions. In the following article we will introduce the current situation in the job market of the Czech Republic taking into consideration its major aspects such as demographics, unemployment rate, number of job vacancies, sectors with highest demand for workers, level of salaries, possibilities for foreigners to work in the Czech Republic, and others.

From early 1990s together with the fall of the Iron Curtain and opening of the economy for foreign investments, Czech Republic has been constantly seeing a growth of its economy. It is now closely integrated with the EU economy, especially tightly after its EU accession in 2004.

According to CIA statistics, the largest single industry of the Czech Republic is automotive, one that accounts for nearly 24% of country’s manufacturing together with its upstream suppliers. Czech Republic produced more than a million cars for the first time in 2010, 80% of which were exported abroad.

Czech economy remains sensitive towards changes of its main export markets, especially Germany. GDP of the Czech Republic fell sharply after the economic crisis of 2008, however the economy slowly recovered in the second half of 2009 and showed a weak growth in the 2014 and stronger growth in 2015. According to Tradingeconomies.com‘s data the purchasing power parity of Czech Republic was registered as 332.5 billion US dollars in 2015. The GDP of the Czech Republic was worth 181.81 billion US dollars in 2015.

The inflation in the Czech Republic has significantly slowed in June 2016. Consumer prices edged up by 0.1% on year-on-year bases in June 2016 at the same pace as in the previous month. The figure matched the market expectations, remaining at the lowest level since December of 2015.

In real economic situation a lot of factors influence the dynamics of a job market, both its demand and offer. So the offer of labor resources is defined mostly by the demographic factors, such as a birthrate, age dependency ratio, working population growth rate and its age and sex structure.

Age structure of Czech population in 2015, according to the CIA statistics, has been as following:

“The retirement age in the Czech Republic remains relatively low – 62.8 for men and 61.4 for women.”

2016 Age dependency ratio is the ratio of dependents – people younger than 15 or older than 64 – to the working age population – those ages 15-64. The lower the number is, the better for economic performance of a country. Age dependency ratio in the Czech Republic in 2014 was measured as 47.9%, compared to 41% in neighboring Slovakia or 53% of EU average, according to the World Bank Indicators.

According to latest data from Eurostat, in 2014 almost 30,000 immigrants were accepted to the Czech Republic, creating additional labor offer and increasing the competition in the job market.

In 2014 roughly 3% of working population were employed in the agriculture sector, 38% in manufacturing (with a tangible fragment of people working in automotive industry), and 59% in services (Statista.com 2014). With 59% of employees working in a tertiary sector (services), the Czech Republic stays behind other EU countries. Less people in services work only in Romania (44.5%) and Poland (57.5%).

Unemployment Rate and Labor Productivity in the Czech Republic

Regarding the unemployed rate Czech Republic has been doing very well over the last years. Seasonally-adjusted percentage of the unemployed reached 5.65% in June – a new post-2009 (time of crises in CR) low, noted Societe Generale in a recent research report. It is currently the European Union’s lowest level.

“European Union youth unemployment rate was 18.6 in May 2016 while in the Czech Republic it stayed at 10.1% in the same period.”

Interestingly, even though the Czechs spend many hours at work (40.4 a week compared to 37.2 a week in the EU), they are among countries with the lowest labor productivity.

Learn more about Working Time And Remuneration Of Overtime Work In The Czech Republic.

Number of job vacancies is an essential factor influencing the ongoing conditions of a job market, presenting the demand for labor. In June 2016 there have been almost 134,000 vacant positions in the Czech Republic. According to Czech Ministry of Labor and Social Affairs, this indicator has been constantly increasing since late 2015.

Foreign Workers in the Czech Republic

“The biggest group of foreigners in Prague are people from Ukraine; surprisingly, in the former Czechoslovakian capital, one can find more Ukrainians (29%) than Slovaks (16%).”

While the Czech language might be an obstacle for foreigners wanting to work here, the good news is that English is widely spoken in many international companies based in the bigger Czech cities and in the business sphere (Internations 2014). According to Ministry of Labor and Social Affairs (2012), the number of foreigners with permanent residence reaches around 171 thousands persons. For example, the biggest group of foreign nationals in Prague are people from Ukraine; surprisingly, in the former Czechoslovakian capital, one can find more Ukrainians (29%) than Slovaks (16%). Discover more about numbers of foreigners working in the Czech Republic in the article: How many Foreigners Are Living And Working In The Czech Republic In 2016?

Wages in Czech Republic have been rapidly growing since the beginning of 90s. Average salary level in the Czech Republic in the first quarter of 2016 amount to 26,480 CZK/month (~981 EUR) (Czech Statistical Office, 2016). While this may look as a relatively low salary to people coming from the other EU countries, the price levels in Prague and other Czech cities allow great living standards even with the average income. Read more about living standards comparison in Prague and Vienna.

Average salary in first quarter of 2016 increased by 4.4% compared to the previous year. Such a rapid growth can be explained by a long stagnation regarding the changes in salary levels. Some experts are concerned about the decrease in competitiveness of Czech product abroad because of such a noticeable wages growth (420on.cz, 2016).

Finding a Job in the Czech Republic

Being a foreigner you can easily find a desired position in a Czech or international company in the Czech Republic. Nowadays, a lot of companies located in the Czech Republic need workers speaking foreign languages or having particular education, knowledge, or cultural background. The most demanded professions in the Czech job market for foreign nationals are in Finance and Accounting, Administration, Customer Service and Sales, and IT sector; job openings are available from an entry level to the managerial positions.

You can browse hundreds of job vacancies at Jobspin.cz – special job board for foreigners in the Czech Republic – and apply for the ones matching your preferences. All the job vacancies you will find at our web are with English or with English + other language. You can increase your chances to getting hired fast when you upload you CV to our database, so the employers can find you first.

If you are looking for a job, don’t miss the upcoming multilingual Jobspin.cz Job Fair Prague 2016 this October in Prague. Jobspin.cz Job Fair Prague is a “must attend” event for expats living in the Czech Republic or going to relocate here and seeking for a job. At the fair you will have a chance to contact 20 exhibiting recruiting companies including the biggest names in the Czech Republic and large international players. Learn more and register your free ticket now!