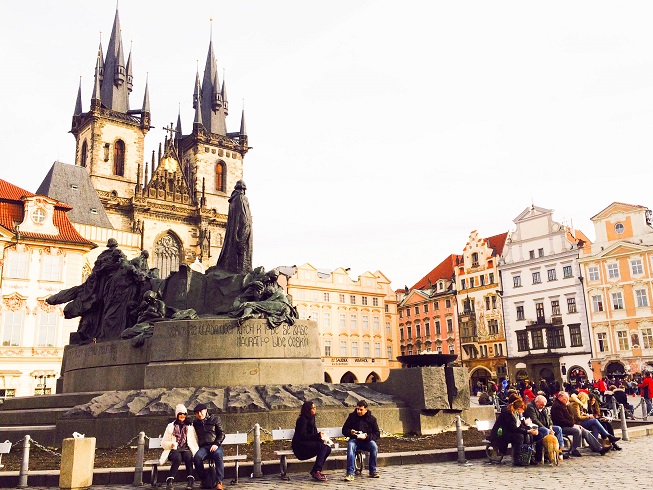 Where-to-be-born Index, formerly known as Quality of Life Index (QLI), indicates what country provides the best opportunities for a healthy, safe and prosperous life in the years ahead. The 2013 Index survey includes 80 countries and territories and uses ten quality of life factors along with forecasts of future GDP per capita. Switzerland scored the best with 8.22 ranking on a scale of 1-10. United States and Germany both got 7.38 while Czech Republic received 6.96, the same ranking as Spain. Neighboring Poland scored 6.66 in a survey.

There is more to life than the cold numbers of GDP and economic statistics – OECD Better Life Index compares well-being across countries, based on 11 topics the organization has identified as fundamental, in the areas of material living conditions (such as Jobs and Income) and quality of life (such as Community, Education, or Safety). We decided to compare well-being of 4 countries. Germany is the economic leader in Europe; Spain represents the southern wing of Europe; and Czech and Slovak Republics give us an insight to the situation in the Central part of European continent.

Housing, a shelter and the getaway, is an important part of one’s life. The place to raise a family, rest and sleep; numerous factors add up creating a concept one can simply call – a home. In the Czech Republic, households on average spend 26% of their gross income on keeping a roof over their heads – the highest level in the OECD countries, where the average is 21%. Spain can boast with the highest number of rooms per person (1.9), with Slovakia being the most minimalist (1.1).

While happiness is not reflected in your check on the payday, income does serve as a variable of a good life. It grants access to goods and services: education, food, and leisure time activities. The lowest two in our selection are Czech and Slovak Republics having USD 18 953 and USD 18 534 net income per household respectively. These are average numbers a single household earns in a year with the taxes deducted. Spain and Germany have got USD 22 and 32 thousands. Clearly, the separation of the Czechoslovakia has not altered the countries in the income that much. It has only been 24 years since its split; we have yet to wait for the difference in the upcoming years.

On the other hand, the financial wealth varies drastically among the selected countries. The households’ “balance sheets” in Slovakia average at 8.8 thousand, which is among the top five of the worst cases in the world; while the Czechs have 20 thousand of assets worth. Despite the index not regarding the possession of land and property, the difference is too large to go unnoticed. Spain scores at an average of 29 thousand with Germany having 49 thousands. The countries’ economic environment allows its citizens to accumulate more wealth, embracing the western consumerism.

The employment rate of working-age Czechs outdoes Slovak Republic (61%) by 8 percent having a stable minor growth over the years. Unlike the beer-loving nation, Spain, due to its crisis, experiences a heavy decline in the employment rate. Moreover, Spanish employees have one of the highest risks of becoming unemployed. The wages and other monetary benefits that come with employment are an important aspect of job quality. Czech people earn USD 21 185 per year on average, much less than the OECD average of USD 40 974. Employees facing a high risk of job loss are more vulnerable, especially in countries with smaller social safety nets. In the Czech Republic, workers face an expected 4.7% loss of earnings if they become unemployed, lower than the OECD average of 6.3%. The social safety net in the Czech Republic is considered to be well developed.

The social inequality is the biggest problem in Spain. The Global Financial Crisis of 2008 has been dropping the average salary over the course of 6 years, widening the gap. The government claims that it has stabilized the economy after the 2008. Yet, the Great Spanish Recession continues. Interestingly enough, better economic environment does not contribute to social equality. Germany is the middling in this dimension with the Czech Republic reaching the top (3.65), followed by Slovakia (3.89).

All the values are reported in 2015 US dollars.
1 is the ultimate equality regardless of economic or social status

Community – Loose bonds in the Czech and Slovak Republics

One of the definitive characteristics of a human being is self-reflection and communication. Social capital may open doors to various dimensions of a human life: economic, cultural, spiritual, or emotional. Having friends and contacts one can rely on is an important part of being a society – an accumulation of people that is governed by rules and orders. Although 90% of Czechs believe that there is a person they can turn to in the time of need, the number is lower than that of the countries in the comparison, despite being in the middle of the median sequence.

57% of adults in Spain have completed upper secondary education (high school), which is much lower than the OECD average of 76%. Despite the fact that necessary skills for social well-being, such as math, science knowledge, and reading are tested disregarding the educational attainment level, education is still an important variable of the nation’s condition. Czech Republic and Slovakia are among the top five of the most educated countries in OECD. Although, there are less people that have attained a high-school diploma in Germany than in the previous two, the average German student gets a higher score on the OECD’s Programme for International Student Assessment (PISA) test.

The issues of urbanization and air pollution have long been on the list of United Nations as a top priority. Being heavily industrialized countries, Czech Republic and Slovakia do not sustain the guideline of the World Health Organization, nor does Germany. Spanish citizens, however, are enjoying relatively fresh air. Although, having a huge social gap creating a big, fat division between poverty and upper class denies the access to fresh, clean water, to the general population.

Being a part of society one is living in is crucial for creating a strong democratic nation. Unfortunately, democracy does not work as intended if the people do not contribute to the public elections. Having lost faith in democratic government, only 59% of Czechs and Slovaks voted during the recent elections. Germany and Spain are not far away; at 70% they are taking top 20 of the whole world. Involving stakeholders in the development of laws and government regulations increases the chances of public opinion being represented at the elections. It promotes prevention of the corruption and improves top-down communication. Slovak Republic comes first in this dimension, entrusting the nation to its people. Next come the Czech Republic and Germany.

Health and Life Satisfaction – Spain on top of life expectancy

Relaxed citizens of Spain scored in the life expectancy topped only by Japan by a few months. The research has shown that the self-reported health condition was also the highest in the country of passionate language and eternal summer. Although, the Czech Republic comes second to last in life expectancy and last at self-reported health, people have very high regards to the local medicine. As much as 90% of people have reported that they have been highly satisfied with the doctor visits. Despite scoring low on the general index, the country still has a potential to grow.

While life satisfaction is highly subjective and cannot be possibly measured objectively as the number of variables reaches infinity, the opinion surveys have shown that general satisfaction is greater in Germany and Spain rather than in the other two states.

Safety and Work-Life Balance – Europe is a safer place

The homicide rates gathered from the local authorities show that each country is on the upper side of the median regarding how safe it is. Spanish citizens have reported to have most free time for their activities outside of work life.