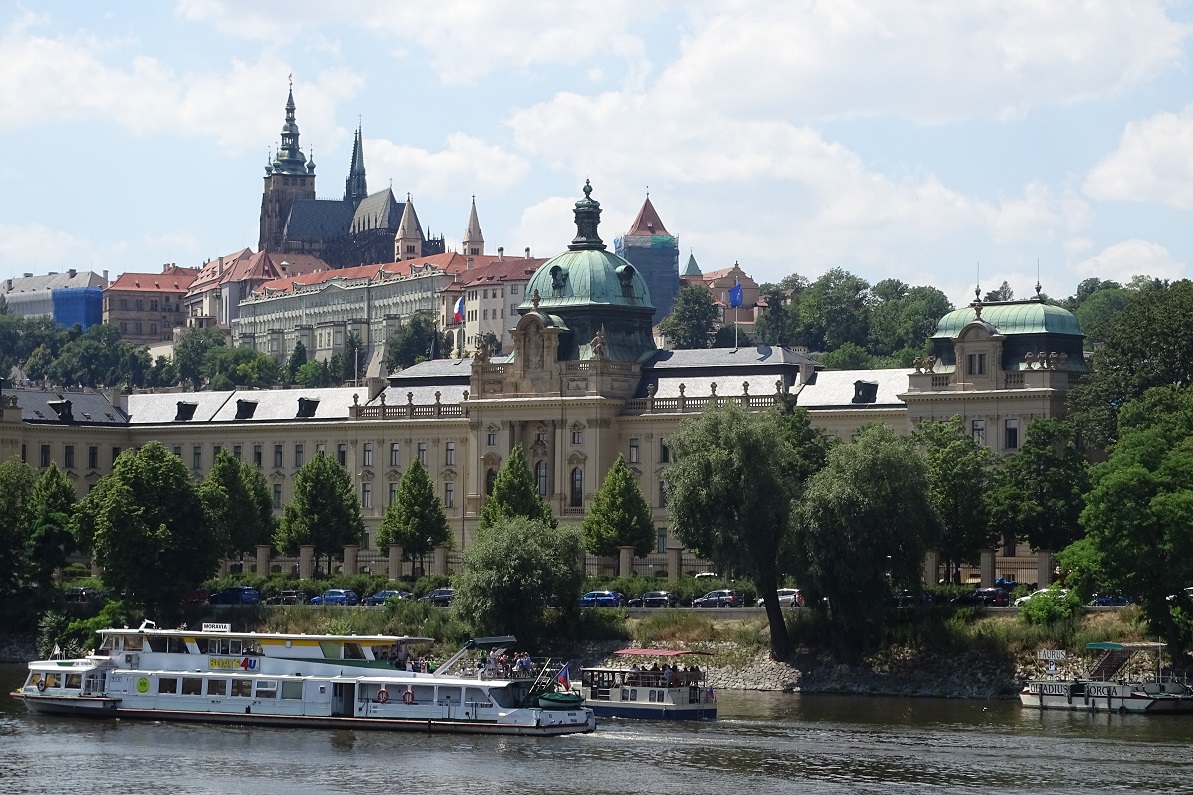 Career Guide: Jobs And Salaries In Prague And Brno By Sectors And Positions In 2019

The Czech economy has been booming for the last few years, and maybe you are thinking about moving there. Yet, you are worried: what are the best paying jobs in Prague? Which field has the best salary? Should you move to Brno instead? In this article, we will give you an overview of the salary levels and economic situation in the Czech Republic, to help you find the best solution for your career. Photo: Z. Moreau.

This growth has not just been happening in the capital; although salaries in Prague are still noticeably higher, all regions have registered a proportional increase in their average wages in the last few years. Some regions have reported a slower increase than others; the Moravskoslezský Region has grown by CZK 6,455 (EUR 251) since 2011, CZK 1,604 (EUR 62) less than the national average increase of CZK 8,059 (EUR 313) for the same period.

But is the growth in salaries directly linked to an improvement in the quality of life? It’s not so easy to say; the data provided by the Czech Statistical Office indicates that the country’s gross domestic product has increased by 2.6% from last year, but the prices of various consumer goods and rents are rising as well.

This year, Czech housing prices were the second fastest growing in Europe, right after Hungary. Nevertheless, living in Prague is still cheaper than living in other European cities.

In our previous article “Are Wages in Czech Republic as Bad as People Say?“ we analyzed the data provided by Numbeo – a crowd-sourced global database of reported consumer prices – and compared the cost of living in the Czech capital with other European capitals such as Berlin, Paris and London. We have come to the conclusion that finding a good job in Prague is still a good investment.

Once that you know that living in the Czech Republic is affordable and feel that it is overall a good choice, you have to pick the city where you are going to live. Prague, with around 1.3 m inhabitants, is the capital and the richest city in the country, where many international companies have their headquarters. Brno, on the other hand, is the second biggest city. With merely 380,000 residents, it is indeed much smaller, but at the same time around 25% cheaper to live in and with similar employment opportunities.

Comparison between apartment prices in Prague and Brno (July 2019, Numbeo.com).

But what about salaries?

Overview: Salary Levels For Selected Jobs in Prague and Brno in 2019

Having a good knowledge of the Czech job market can therefore be fundamental for your future or current life in the Czech Republic. Knowing what the average wage is in your region can confirm your desire to move somewhere else, or show you that the right job for you might be just around the corner, and you just have to keep looking.

We decided to compare the salaries in the two biggest cities in the Czech Republic, Prague and Brno, to help you make the best choice for your present and future career. As you will see, there is a difference in salaries (jobs in the capital are paid better) but as we have seen above, life in Prague is more expensive as well.

In the tables below, you will find a comparison of salaries in Euros in Prague and Brno to help you find the best job for you. The salaries marked as minimum state the most common entry-level or lowest salaries offered per month, in Euros. The minimum values marked with * are based on the level of education – the candidate has not passed the school-leaving exam. The maximum column reflects a candidate’s skills and experience (generally at least three years in the field) as well as the employers’ willingness to pay. The maximum values marked with * refer to the salary levels of candidates with university education

Notes: Exchange rate by Czech National Bank; verified 06-08-2019. 1 EUR = CZK 25.73. The salaries in the table above are gross monthly salaries – income tax and other contributions are not deducted. Salary levels are based on data from the ABSL Report prepared by the Association of Business Service Leaders in the Czech Republic (ABSL) and Czech wage comparison engine Platy.cz.

As we could already see in 2016, Prague is the region where the wages are the highest, followed by Central Bohemia and South Moravia (Brno). 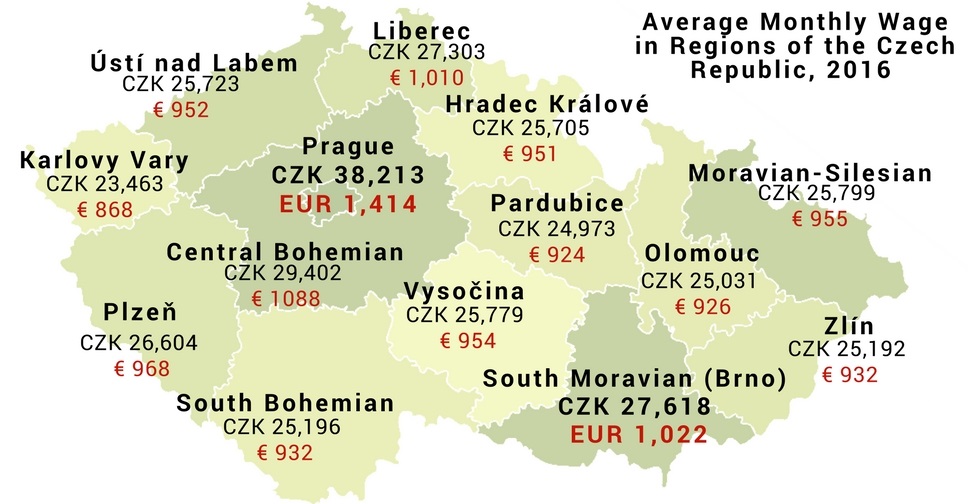 The Plzeň region, which had a lower average wage in 2016 than the South Moravia, is now ranked after Prague and before the Brno region. According to Czech Statistical Office (CZSO), the lowest average wage in the country is currently in the region of Karlovy Vary, where the average salary is CZK 29,236 (EUR 1,141); CZK 13,266 (EUR 519) less than in Prague. 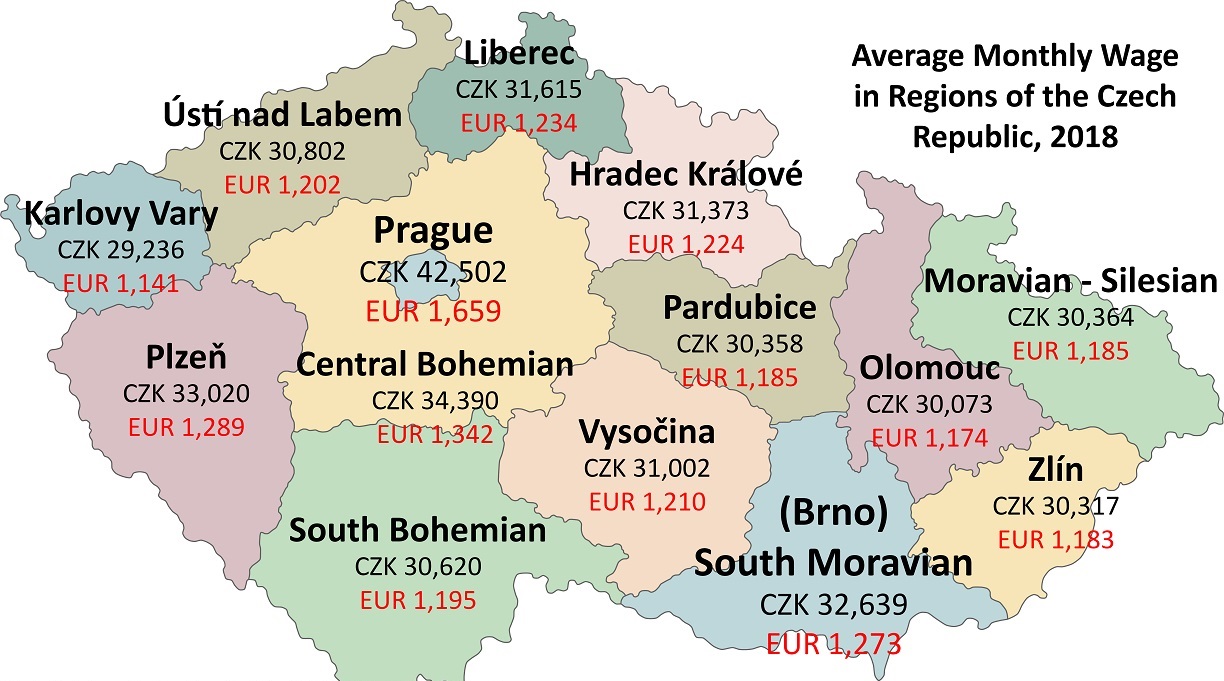 The wage difference between men and women is still high. According to the data collected by CZSO, women earn on average CZK 7,381 (EUR 287) less than their male colleagues.

The tips for people who would like to find a job in Prague or Brno were prepared by the Jobspin team: a mix of interns, graduates, and university drop outs. Like what you’re reading? Subscribe to monthly news highlights in the Czech job market and economy – Newsletter Sign Up. Stay tuned – more reading is coming next week.

Create your own review
Career Guide: Jobs and Salaries In Prague and Brno by Sectors and Positions in 2019
Average rating:   0 reviews